A copy of this post is sent to soc-coordination@lists.alioth.debian.org as well as to debian-bootstrap@lists.mister-muffin.de.

Pietro suggests a faster way to generate installation sets for a list of packages. In my case, I need an installation set for every source package in the archive to find out how often a binary package is needed to build a source package. As a result, the speed is doubled in contrast to the original approach.

I formulate an email to the list, reporting of dependency graphs of debhelper, cdbs, pkg-config and libgtk2.0-dev. My current technique gets an installation set for a source package, removes all those that are already installable and adds the others as a dependency of that source package. This dependency will include an installation set of that binary as well minus all packages that are already available. The problem with that approach are dependency cycles created by long dependency chains. Example: src:A needs B needs C needs A. B and C would both be added as a dependency of src:A. B as well as C would also include their installation set which in both cases includes A. So now there are two cycles: src:A->B->A and src:A->C->A. For a real life example, look at the following situation of cdbs and src:sqlite3.

After several emails with Pietro I learn about syntactic dependency graphs. To document my progress and prove my efforts I committed the code as commit 6684c13. But this code was soon found out to be unecessary so it will be removed later and just serves as documentation.

I came up with another (better?) solution to get the chosen disjunctions. It simply uses the calculated installation set to decide for each disjunction which one was taken by the solver. I reported that important step and the open questions involved with it in an email to the list. The problem always was, that an installation set can easily contain more than one package of a disjunction. In this case it is not clear which branch was chosen by the solver. I found, that in Ubuntu Natty there are only 6 such packages and for each of them the situation can be solved. It can be solved because in all of those cases it is that either one package of a disjunction provides the other or that both packages depend upon each other, which means that both have to be included.

I have to have an algorithm that finds all circuits in a given graph. This is necessary so that:

It seems that Johnson's algorithm is the best way to do this complexity wise and Pietro already blogged about the problem together with an implementation of the algorithm in ocaml. Unfortunately it turns out that his code doesnt implement the algorithm correctly and hence misses out on some cycles. The fix seems not to be too trivial so I'm still investigating it.

While the first week was productive as usual, I had to work some time on a University project during the second week as well as attend a family meeting. I will catch up with the lost time over the course of the next week.

Using dose 3.0 (which fixes a bug about essential packages) the output of the algorithms is now likely less wrong then before.

Performance was improved in the generation of installation sets as well as in the code that tries out how many packages can be built in multiple rounds. This was achieved by more caching, less unnecessary operations in looping constructs, replacing lists with hashtables, not creating universes where not necessary.

The main program, basenocycles.ml now has a much better menu structure.

As more and more scripts are added, more and more functionality is moved to bootstrapCommon.ml which makes each script much cleaner.

what to test for cross building

As discussed in the "Future" section of the last report, I now automated the process of finding out which packages, if they were cross compiled, would make the whole archive available because they break all cycles and allow native compilation of the rest. The outcome: to build 3333 out of 3339 packages in natty natively, at most 186 source packages must be cross compiled. The other six cannot be compiled because of version mismatches in the Natty Sources.bz2 and Packages.bz2. The code can be run from crosseverything.ml.

For cdbs it is now clearly visible that cdbs depends on libsqlite3-0 which builds from src:sqlite3 which depends on cdbs. 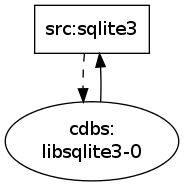 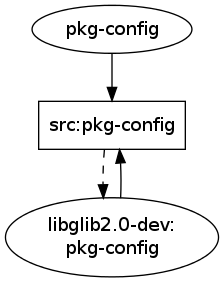 I will prepare content for wookey's debconf talk on crossbuilding and bootstrapping. As this will include directions how to use the current code, I will kill two birds with one stone and write some proper documentation for my current source.

The following two lists will be displayed after a dependency graph is calculated and reduced to its scc:

Patrick managed to cross build packages with sbuild now. So the list of packages that crosseverything.ml produces can now be checked efficiently for cross buildability. With this list, potentially more cycles can be broken out of the box. A feature will be added that allows the user to remove all packages from a dependency graph that can be cross compiled without any additional effort.

Version mismatches between source and binary packages in Sources.bz2 and Packages.bz2 respectively in Ubuntu make the scripts fail and/or produce wrong results. Debian (even Sid) doesnt have this problem so I should find out where to report this problem to Ubuntu.