enumerating elementary circuits of a directed_graph

For my GSoC project this year I need to be able to enumerate all elementary circuits of a directed graph. My code is written in Ocaml but neither the ocamlgraph library nor graph libraries for other languages seem to implement a well tested algorithm for this task.

In lack of such a well tested solution to the problem, I decided to implement a couple of different algorithms. Since it is unlikely that different algorithms yield the same wrong result, I can be certain enough that each individual algorithm is working correctly in case they all agree on a single solution.

As a result I wrote a testsuite, containing an unholy mixture of Python, Ocaml, D and Java code which implements algorithms by D. B. Johnson, R. Tarjan, K. A. Hawick and H. A. James.

The earliest algorithm that I included was published by R. Tarjan in 1973.

I implemented the pseudocode given in the paper using Python. The git repository can be found here: https://github.com/josch/cycles_tarjan

Algorithm by D. B. Johnson

I found two implementations of Johnson's algorithm. One was done by Frank Meyer and can be downloaded as a zip archive. The other was done by Pietro Abate and the code can be found in a blog entry which also points to a git repository.

The implementation by Frank Meyer seemed to work flawlessly. I only had to add code so that a graph could be given via commandline. The git repository of my additions can be found here: https://github.com/josch/cycles_johnson_meyer

Pietro Abate implemented an iterative and a functional version of Johnson's algorithm. It turned out that both yielded incorrect results as some cycles were missing from the output. A fixed version can be found in this git repository: https://github.com/josch/cycles_johnson_abate

Algorithm by K. A. Hawick and H. A. James

The algorithm by K. A. Hawick and H. A. James from 2008 improves further on Johnson's algorithm and does away with its limitations.

In contrast to Johnson's algorithm, the algorithm by K. A. Hawick and H. A. James is able to handle graphs containing edges that start and end at the same vertex as well as multiple edges connecting the same two vertices. I do not need this functionality but add the code as additional verification.

The paper posts extensive code snippets written in the D programming language. A full, working version with all pieces connected together can be found here: https://github.com/josch/cycles_hawick_james

The algorithm was verified using example output given in the paper. The project README states how to reproduce it.

All four codebases have been modified to produce executables that take the same commandline arguments which describes the graphs to investigate.

Lets look at the following graph as an example: 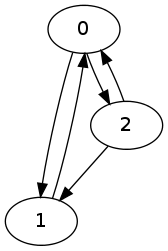 The DOT source for this graph is:

To generate the list of elementary circuits using Tarjan's algorithm for the graph above, use:

The commandline arguments are the exact same for the other three methods and yield the same result in the same order.

If the DOT graph is in a format as simple as above, the following sed construct can be used to generate the commandline argument that represents the graph:

As all four codebases take the same input format and have the same output format, it is now trivial to write a testsuite that compares the individual output of each algorithm for the same input and checks for differences.

The code of the testsuite is available via this git repository: https://github.com/josch/cycle_test

The other four repositories exist as submodules of the testsuite repository.

A testrun is done via calling:

The argument to the shell script is an integer denoting the maximum number N of vertices for which graphs will be generated.

The script will compile the Ocaml, Java and D sourcecode of the submodules as well as an ocaml script called rand_graph.ml which generates random graphs from v = 1..N vertices where N is given as a commandline argument. For each number of vertices n, e = 1..M number of edges are chosen where M is maximum number of edges given the number of vertices. For every combination of number of vertices v and number of edges e, a graph is randomly generated using Pack.Digraph.Rand.graph from the ocamlgraph library. Each of those generated graphs is checked for cycles and written to a file graph-v-e.dot if the graph contains a cycle.

test.sh then loops over all generated dot files. It uses the above sed expression to convert each dot file to a commandline argument for each of the algorithms.

The outputs of each algorithm are then compared with each other and only if they do not differ, does the loop continue. Otherwise the script returns with an exit code.

Running the testsuite with a maximum of 12 vertices takes about 33 minutes on a 2.53GHz Core2Duo and produces graphs with as much as 1.1 million cycles. It seems that all five implementations agree on the output for all 504 generated graphs that were used as input.

If there should be another implementation of an algorithm that enumerates all elementary circuits of a directed graph, I would like to add it.

There are some more papers that I would like to read but I lack access to epubs.siam.org and ieeexplore.ieee.org and would have to buy them.

Benchmarks seem a bit pointless as not only the algorithms are very different from each other (and there are many ways to tweak each of them) but also the programming languages differ. Though for the curious kind, it follows the time each algorithm takes to enumerate all cycles for all generated graphs up to 11 vertices.

The D code potentially suffers from the bigger datastructures and other bookkeeping that is required to support multi and self arcs.

The java code implements a whole graph library which might explain some of its slowness.