This post is about the port bootstrap build ordering tool (naming suggestions welcome) which was started as a Debian Google Summer of Code project in 2012 and continued to be developed afterwards. Sources are available through gitorious.

In the end of November 2012, I managed to put down an approximation algorithm to the feedback arc set problem which allowed to break the dependency graph into a directed acyclic graph with only few removed build dependencies. I wrote about this effort on our mailinglist but didnt mention it here because it was still too much of a proof-of-concept. Later, in January 2013, I mentioned the result of this algorithm in an email wookey and me wrote to debian-devel mailinglist.

Many things happened since November 2012:

Processing pipeline instead of monolithic tools

The tools I developed so far tried to accomplish everything by themselves, reusing functionality implemented in a central library. Therefor, if one wanted to try out even trivial new things, it mostly meant to hack some OCaml code. Pietro Abate suggested to instead develop smaller tools which could work independently of each other, would only execute one algorithm each and could easily be connected together in different ways to achieve different effects.

This switch is now done and all functionality from the old tools is moved into a new toolset. The exchange format between the tools is either plain text files in deb822 control format (Packages/Sources files) or a dependency graph. The dependency graph is currently marshalled by OCaml but future versions should work with just passing a GraphML (an XML graph format) representation around.

This new way of doing things seems close to the UNIX philosophy (each program does one thing well, data is stored as text, every program is a filter). For example the deb822 control output can easily be manipulated using grep-dctrl(1) and there exist many tools which can read, analyze and manipulate GraphML. It is a big improvement over the old, monolithic tools which did not allow to manipulate any intermediate result by external, existing tools. Currently, a shell script (native.sh) will execute all tools in a meaningful order, connecting them together correctly. The same tools will be used for a future cross.sh but they will be connected differently.

I wrote about a first proposal of what the individual tools should do and how they should be connected in this email from which I also linked a confusing overview of the pipeline. This overview has recently been improved to be even more confusing and the current version of the lower half (the native part) now looks like this: 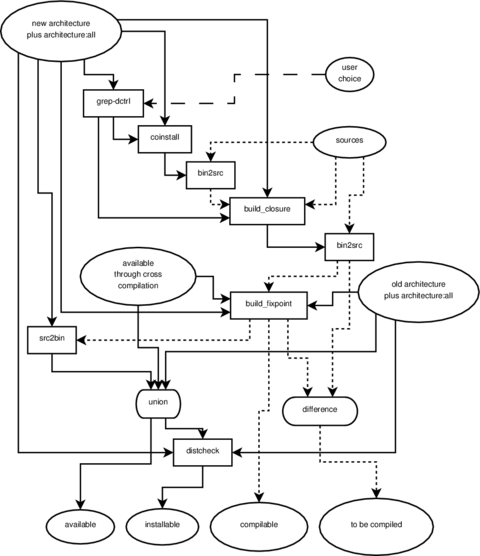 Two new ways to break dependency cycles have been discovered

So far, we knew of three ways to formally break dependency cycles:

Two new methods can be added to the above:

Back in September when I was visiting irill, Pietro found a flaw in how the dependency graph used to be generated. He supplied a new definition of the dependency graph which does away with the problem he found. After fixing some small issues with his code, I changed all the existing algorithms to use the new graph definition. The old graph is as of today removed from the repository. Thanks to Pietro for supplying the new graph definition - I must still admit that my OCaml foo is not strong enough to have come up with his code.

As mentioned in the introduction, wookey and me addressed the debian-devel list with a proposal on necessary changes for an automated bootstrapping of Debian. During the discussiong, two important things came up which are to be considered by the dependency graph algorithms:

Both things make it necessary to alter the dependency graph during the generation of a feedback arc set and feedback vertex set beyond the simple removal of edges. Luckily, the developed approximation algorithms can be extended to support such changes in the graph.

The initially developed feedback arc set algorithm is well suited to discover build dependency edges which should be dropped. It performs far worse when creating the final build order because it only considers edges by itself and not how many edges of a source package can be dropped by profile building it.

The adjusted algorithm for generating a build order is more of a feedback vertex set algorithm because instead of greedily finding the edge with most cycles through it, it greedily finds the source package which would break most cycles if it was profile built.

After implementing all the features above I now feel more confident to publish the current status of the tools to a wider audience.

The following test shows a run of the aforementioned ./native.sh shell script. Its final output is a list of source packages which have to be profile built and a build order. Using the resulting build order, starting from a minimal build system (essential:yes, build-essential and debhelper), all source packages will be compiled which are needed to compile all binary packages in the system. The result will therefor be a list of source and binary packages which fulfill the following property:

I called this a "reduceded distribution" in earlier posts. The interesting property of this specific selection is, that it contains the biggest problem set of Debian when bootstrapping it: a 900 to 1000 nodes big strongly connected component. Here is a visualization of the problem: 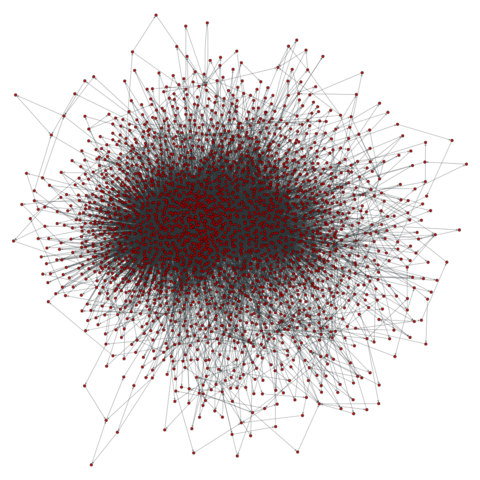 Source packages do not yet come with build profiles and the cross build situation can not yet be analyzed, so the following assumptions were made:

The last point is about 14 build dependencies which were decided to be broken by the feedback arc set algorithm but for which other data sources did not indicate that they are actually breakable. Those 14 are dynamically generated by native.sh.

If above assumptions should not be too far from the actual situation, then not more than 73 source packages have to be modified to bootstrap a reduced distribution. This reduced distribution even includes dependency-wise "big" packages like webkit, metacity, iceweasel, network-manager, tracker, gnome-panel, evolution-data-server, kde-runtime, libav and nautilus. By changing one line in native.sh one could easily develop a build order which generates gnome-desktop or really any given (meta-)package selection.

All of native.sh takes only 80 seconds to execute on my system (Core i5, 2.5 GHz, singlethreaded). Here is the final build order which creates 2044 binary packages from 613 source packages.