Back in 2007 I stumbled over the "Plus Fours Routefinder", an invention of the 1920's. It's worn on the wrist and allows the user to scroll through a map of the route they planned to take, rolled up on little wooden rollers. 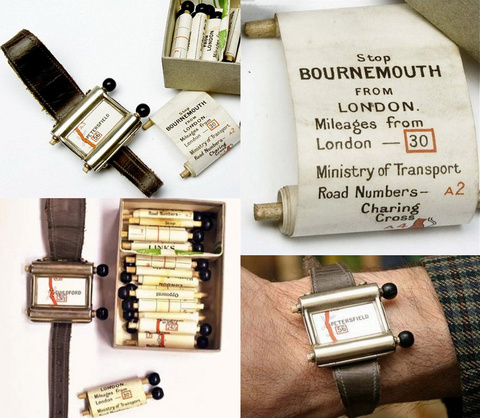 At that point I thought: that's awesome for long trips where you either dont want to take electronics with you or where you are without any electricity for a long time. And creating such rollable custom maps of your route automatically using openstreetmap data should be a breeze! Nevertheless it seems nobody picked up the idea.

Years passed and in a few weeks I'll go on a biking trip along the Weser, a river in nothern Germany. For my last multi-day trip (which was through the Odenwald, an area in southern Germany) I printed a big map from openstreetmap data which contained the whole route. Openstreetmap data is fantastic for this because in contrast to commercial maps it doesnt only allow you to just print the area you need but also allows you to highlight your planned route and objects you would probably not find in most commercial maps like for example supermarkets to stock up on supplies or bicycle repair shops.

Unfortunately such big maps have the disadvantage that to show everything in the amount of detail that you want along your route, they have to be pretty huge and thus easily become an inconvenience because the local plotter can't handle paper as large as DIN A0 or because it's a pain to repeatedly fold and unfold the whole thing every time you want to look at it. Strong winds are also no fun with a huge sheet of paper in your hands. One solution would be to print DIN A4 sized map regions in the desired scale. But that has the disadvantage that either you find yourself going back and forth between subsequent pages because you happen to be right at the border between two pages or you have to print sufficiently large overlaps, resulting in many duplicate map pieces and more pages of paper than you would like to carry with you.

It was then that I remembered the "Plus Fours Routefinder" concept. Given a predefined route it only shows what's important to you: all things close to the route you plan to travel along. Since it's a long continuous roll of paper there is no problem with folding because as you travel along the route you unroll one end and roll up the other. And because it's a long continuous map there is also no need for flipping pages or large overlap regions. There is not even the problem of not finding a big enough sheet of paper because multiple DIN A4 sheets can easily be glued together at their ends to form a long roll.

On the left you see the route we want to take: the bicycle route along the Weser river. If I wanted to print that map on a scale that allows me to see objects in sufficient detail along our route, then I would also see objects in Hamburg (upper right corner) in the same amount of detail. Clearly a waste of ink and paper as the route is never even close to Hamburg.

As the first step, a smooth approximation of the route has to be found. It seems that the best way to do that is to calculate a B-Spline curve approximating the input data with a given smoothness. On the right you can see the approximated curve with a smoothing value of 6. The curve is sampled into 20 linear segments. I calculated the B-Spline using the FITPACK library to which scipy offers a Python binding.

Using a simple transform, each point of the original map and the original path in each quadrilateral is then mapped to a point inside the corresponding "straight" rectangle. Each target rectangle has the height of the line segment it corresponds to. It can be seen that while the large scale curvature of the path is lost in the result, fine details remain perfectly visible. The assumption here is, that while travelling a path several hundred kilometers long, it does not matter that large scale curvature that one is not able to perceive anyways is not preserved.

The transformation is done on a Mercator projection of the map itself as well as the data of the path. Therefore, this method probably doesnt work if you plan to travel to one of the poles.

Currently I transform openstreetmap bitmap data. This is not quite optimal as it leads to text on the map being distorted. It would be just as easy to apply the necessary transformations to raw openstreetmap XML data but unfortunately I didnt find a way to render the resulting transformed map data as a raster image without setting up a database. I would've thought that it would be possible to have a standalone program reading openstreetmap XML and dumping out raster or svg images without a round trip through a database. Furthermore, tilemill, one of the programs that seem to be one of the least hasslesome to set up and produce raster images is stuck in an ITP and the existing packaging attempt fails to produce a non-empty binary package. Since I have no clue about nodejs packaging, I wrote about this to the pkg-javascript-devel list. Maybe I can find a kind soul to help me with it. 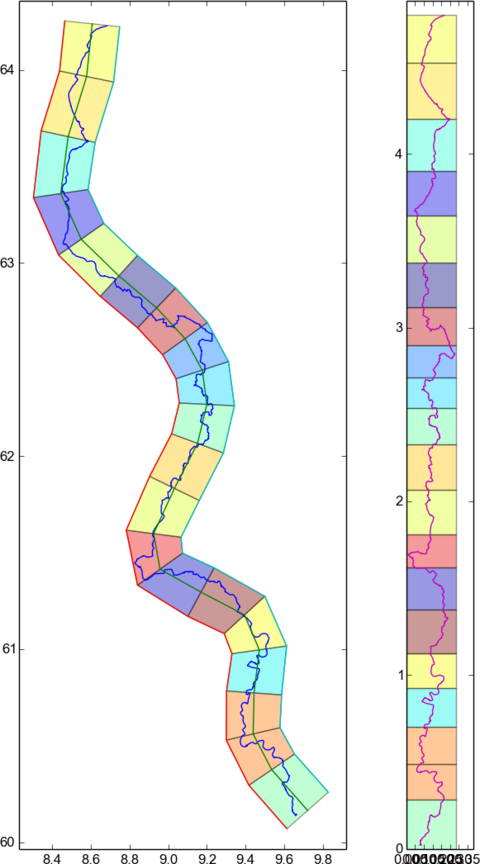 Here a side by side overview that doesnt include the underlying map data but only the path. It shows how small details are preserved in the transformation.

The code that produced the images in this post is very crude, unoptimized and kinda messy. If you dont care, then it can be accessed here